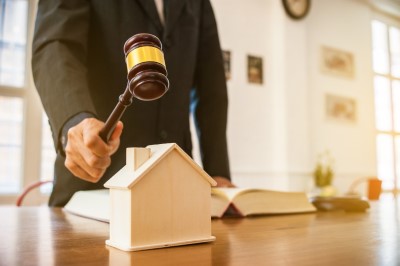 Usually the Land Registry definitively states who owns a particular property. The majority of Land in the UK has been registered, though there is still land that is unregistered. Other interests in land can also be registered such as mortgages and leases.

All properties have both a legal and equitable ownership. It is possible to have the legal ownership in one persons name and the equitable interest in another name. The legal interest being whose a name is registered as the owner.  The equitable ownership being a reflection of the monetary value of the property. These ownerships reflect the 2 different legal systems that existed in England and Wales prior to 1875;the Common Law Court and the Courts of Equity

The common law was often harsh and was based on if the legal requirement had been complied with. In equity, a judge determines what is fair and just. So for instance where all the requirements for a legal mortgage have not been met, then an equitable mortgage may be found.

Some issues that normally arise in Property Law are associated with:

Practicing in civil litigation, commercial litigation, insolvency/bankruptcy and employment law; ensuring that our clients are aware of the limitation of the legal process and the risks/rewards of litigation.

In order to improve our service, we also want to know where our clients feel that we could improve or if we have gone wrong. Our Complaints procedure can be found here.